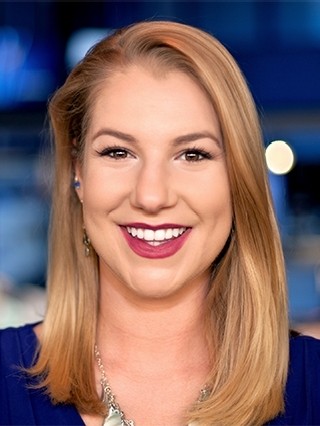 Marie Edinger is an award-winning multi-media journalist. She digitally records, writes, edits, and presents her own work on live television as well as online. She loves that a career in broadcast journalism lets her meet people from all walks of life, and experience things she never would have otherwise. She strives to tell each person’s story as fairly and accurately as possible, in ways that interest and inspire anyone hearing it.

Marie came to Fox26 News from WLBT in Jackson, Mississippi.

Marie is originally from Gainesville, Florida. Even as a child, she showed interest in television news, reading the “Morning Announcements” from her middle school and high school’s school-wide broadcast stations. There was no exact moment where Marie realized she wanted to practice journalism, it just seemed to always be there in the back of her head - her parents often like to mention that it seems, as a baby, once she started talking, she never stopped.

Marie attended the University of Florida, studying Telecommunications and Spanish Linguistics, graduating in 2016. While there, she had the privilege to work for WUFT, the school’s student-run news station. WUFT provided her with mentors who helped shape and support her and provided her the platform she needed to practice her craft. College also let her practice all aspects of television news – from producing, to running an audio board and a Teleprompter, to anchoring, reporting, and writing for the web. During her last semester at UF, she won a College AP Award for Best Long-Form General Assignment Report.

Throughout college, Marie also spent a significant amount of time working in radio, reporting long-form stories and anchoring the local NPR affiliate’s news cut-ins during “Morning Edition” and “All Things Considered”. She has a love for radio reporting that has a great influence on the way she presents stories in television pieces. She won several Florida AP awards for her work in radio, including First Place for Individual Achievement, and First Place for Best General Assignment Piece.

Marie loves the outdoors, so she is extremely excited to be in Fresno so close to several of California’s beautiful national parks. She also loves food and cooking – it’s rare she goes more than five minutes without thinking of food. She loves watching sports and is particularly passionate about college football (Go Gators!). Marie adores her wonderful parents, who she says are more loving and supportive than any daughter could ever ask, and whose personalities balance goofiness with intelligence in a truly delightful way that brightens her life day in and day out.