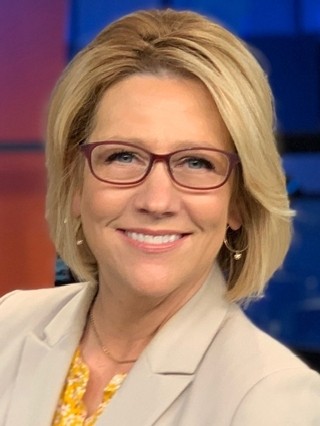 Kim broadcasts live for 5 hours each weekday. She co-hosts Great Day with Kopi Sotiropulos and Jim De La Vega. Her years of live reporting prepared her for this job that commonly calls for adlibbing breaking news all around the world. She and Kopi started this trend- setting show in 2003 and are still going strong.

Kim is also a published author. She co-wrote Broadcast News in the Digital Age: A Guide to Storytelling, Producing and Performing Online and on TV with her Fresno State colleague Faith Sidlow.

Her career started in 1988 with a telecommunications degree from Chico State. Her first job was in Bakersfield at KERO where she worked her way up the ranks from morning anchor/reporter to weekend anchor/producer to weeknight anchor/reporter. (All the while working as a waitress during the day, and even working a few months at KERN radio for the midday news.)

She then moved to the southeast and worked as main nighttime anchor at WBIR and WVLT in Knoxville, Tennessee. During that and her many community commitments, she also earned her master's degree in broadcast management at The University of Tennessee.

In 2000 she got the opportunity to come back home to California. She worked in San Jose as a technology and business reporter, and weekend news anchor at KNTV.

Needing a better quality of life, she accepted the opportunity to start a brand new weekly news and entertainment program, Great Day on KMPH.

Aside from her responsibilities on Great Day, which include many community appearances, she also coordinates and produces monthly ‘One Classroom at a Time’ reports surprising teachers with a $1,000 grant to be used in the classroom. She also produces and anchors local ‘Kindness Counts’ reports.

Once Kim is finished with her anchoring and reporting duties, she helps inspire and mentor students as a college professor. Kim teaches Broadcast News Writing, On-Air Performance and the capstone Newscast Production class at Fresno State, and is a mentor at the annual ‘Camp News’ at Pepperdine University.

Kim served for ten years on the Board of Governors for the National Association of Television Arts and Sciences which is best known for its TV News Emmy Awards. She has one Edward R. Murrow Award, an Emmy, three Emmy nominations, was inducted into the NATAS Silver Circle in 2014 for over 25 years in the TV news business, was awarded The Governors' Service Medallion in 2017 for her volunteer work through NATAS, and Governors’ Citation in 2018. KMPH awarded her Employee of the Year in 2004, Miss Congeniality in 2010 and the Lifetime Achievement Award in 2013. The city of Fresno declared “Kim Stephens Day” on December 18, 2014 for her dedication to high-quality journalism in Fresno and Northern California.

"Waking up at 2:30 a.m. is not a joy, I'll be honest. But I love being off by noon so I can head off to my classes at Fresno State. I'm always tired, but working on such a fun show in the morning is a kick. I learn something new every day. Working with a nice, creative crew makes it all worthwhile!"